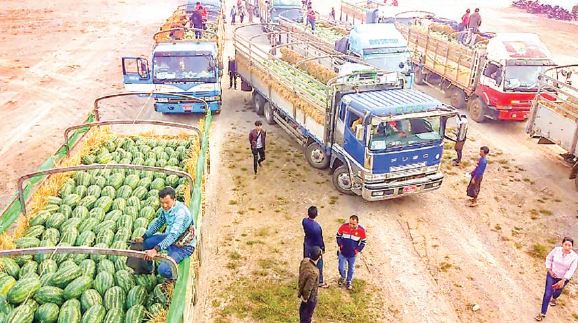 With the closure of China’s customs office during the Chinese New Year Festival, Muse fruit depots will suspend trading between 24 and 26 January, according to the Khwar Nyo fruit depot.

“On 16 January, there was steady fruit trade. After the New Year Festival, the market will see more potential. The current problem in trading is traffic congestion along the Kyin San Kyawt road section. More than 700 watermelon and muskmelon trucks were seen queuing on the road on 20 January,” according to Khwar Nyo Trading Company Limited.

The Muse fruit market usually sees active trade ahead of the Chinese New Year Festival. “At present, watermelon prices are ranging from 1,500 to 48,000 Yuan per 15 tons, depending on quality. Muskmelons are priced 2.5-8 Yuan per kilogram,” according to the Khwar Nyo Trading Co. Ltd. 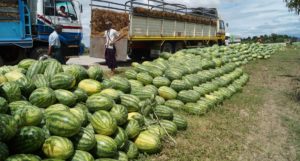 Watermelons and muskmelons top the list of fruits exported to China, and the export volume has been increasing significantly year over year, according to the Ministry of Commerce.

“If growers follow GAP guidelines, they can get higher prices. But, a majority of them are still using pesticides,” said officials. Myanmar currently exports around 800,000 tons of watermelons per year.